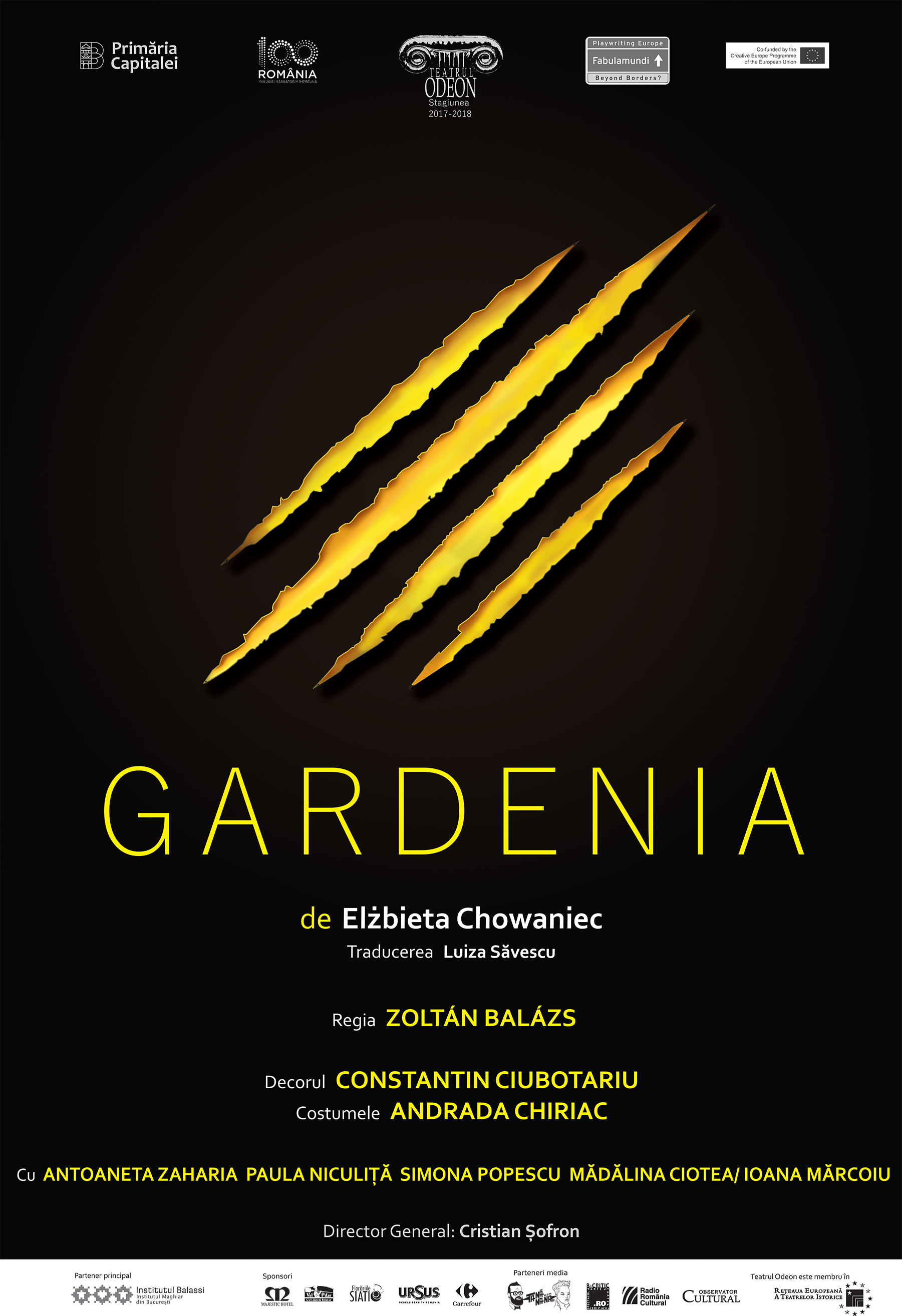 English subtitles could be provided by request.
If you are interested please send a message from contact form mail, at latest two days before.

Gardenia tells the story of four generations of Polish women from the same family who are fighting with their schemas, convictions and heritage. All the women present their story at the same age – great grandmother, grandmother, mother and daughter – thirty three years old and get through historic circumstances starting with the second world war till the present time. These circumstances shape partly women’s life but what influence them directly, they would say, is their mother. To what extent does this happen, we let you discover yourself, in a show where the director’s vision blends the theatre with the opera arias.

Zoltán Balázs graduated as an actor and director from the University of Theatre and Film Arts in Budapest. He participated in several foreign workshops such as in Anatoly Vasiliev’s and Josef Nadj’s workshop in Avignon. He studied with Robert Wilson in Paris and he also graduated the European Theatre Union’s directorial course in Stuttgart. In 2001 he founded one of the most important independent theatre, Maladype Theatre, and since he has been the artistic director in Budapest, Hungary. Zoltán Balázs is a regular guest at festivals and theatres around the globe - not just with his own company but as a director, too. He directed in the United States, France, Germany, Slovenia, Slovakia and Romania as well. His many-sided and versatile artistic work and his performances experimenting with new theatrical language have been honoured with many theatre and state awards. Through his performances he aims to give the audience a theatrical experience which is complex, appeals to emotions and senses and raises the scenery, motion and music to the same level as the lyrics.

Gardenia is produced within the European project Fabulamundi. Playwriting Europe, third edition, funded by the European Commission within the program Creative Europe 2017-2020.

Is it something genetic? Or is about the mentality that, over the course of a century, does not change fundamentally? A certain kind of implacable, a touch of destiny, beyond our power to manage our own life? Or the irresistible desire to be part of the future of our children? To be - so - contemporary to our posterity?

Four destinies marked by Mother’s personality. Four women, four survivors, and four victims in search of escape, becoming a trauma source for the next generation. The repeated burden of the struggle to break out of the failure paradigm. Alcohol, lack of affection, routine, abandonment, selfishness, wandering and a painful and impossible sensation of irretrievable. A world that does not assume martyrdom all the way, and which – perhaps that’s why – cannot be saved.

Elzbieta Chowaniec’s text is concise, sharp, rough, like an indictment or – more accurately – like a probatorium that – paradoxically – is not seeking to establish the truth and the conviction of perpetrators, but draws us into a seductive interrogatory with ourselves. In a hostile, chaotic universe lacking forgiveness, compassion, and in which illusions are lost quickly and tragically, life continues to give life. A tremendous, powerful text, valuable both in spiritual and emotional terms.

What Hungarian director Zoltán Balázs managed together with four actresses of magnetic personality and undeniable creative scale – Antoaneta Zaharia, Paula Niculiţă, Simona Popescu Madalina Ciotea – can be assimilated to an intensive theatre course. Seeing this show it is clear to us, it is impeccably represented what means and implies a director conception (to know WHAT you want with a text, WHERE you’re going and HOW to make your way to the safest and most spectacular way to a percussive message). The director is a master of the profession’s means, he has the ability to find the formula, the concept, the structure on which he builds with a surgical precision, a solid communication bridge with the audience.

The format of the opera arias is excellently covered by the director and the actresses. The whole staging has a special stylistic rigor in construction, size, rarely good taste (congratulations for Constantin Ciubotaru – stage design and Andrada Chiriac – costumes!). Attention to phrasing, rhythm, tone, pauses, gesture – a symphony impeccably orchestrated, conducted and performed, a thrilling assumption of the score, the actresses managing a magnetic transfiguration (unforgettable brightness of their eyes – captive innocence in the prison of a body under the terror of the biological clock).

At the end of the season, we received this huge gift. Gardenia is a fascinating, thrilling and revealing expedition in the history of a family seen from the perspective of the prodigal mothers and their daughters waiting patiently for them. A miraculous show that speaks with restrained rage about love, maternity, and how terribly lonely we find (even) on the (already) beaten roads of our lives.”

The text is very well written, it is glacial, without ornaments, which gives it the cool beauty of a diamond. And here comes the extraordinary sense of the director Zoltán Balázs, who knew how to maintain the hardness and clarity of the text through movements and phrases denuded by sentimental ornaments. The show becomes an ex-position, with the thought of a therapy session, during which unfolds the events, almost surgically, to reveal better the universally valid texture symbolized by the gardenia mentioned in the fourth sequence. The inner world becomes verb, but a translucent and objective verb, which allows you to see more clearly inside.

The key of  director reading is perfectly supported by Constantin Ciubotariu's set and Andrada Chiriac's costumes, reflecting the same schematism of mother-daughter-mother-daughter relationships. The geometry of the stage movement and replicas, as well as the essentialization of affective relationships, finds a perfect correspondence in the geometry of space and set, as well as that of costumes.

I congratulate the director Zoltán Balázs for how he managed to build from fine details an entire history of the trauma of the four women, which eventually becomes a single-trauma-with-four-characters. Two colors, yellow and black, the former being dominant, because, not so, the traumatic black had to be erased as soon as possible, except that ... the director played intelligently on the scenographic card, so that somewhere in the scenic sequence the yellow becomes the color trauma and black reflects the superiority of the survivor. (...)

I had rarely the occasion to hear so many famous or less-known opera arias in a theatre show. And I find brilliant the combination between the music of the great opera composers and the subject of the show. (...)

A very good show that does not leave you indifferent, which brings into atention four very good actresses excellently highlighted by a director who has assumed till the end the idea to break the trauma in slices: just by understanding you can go further and only so can avoid the restoration of the mistakes of the past.